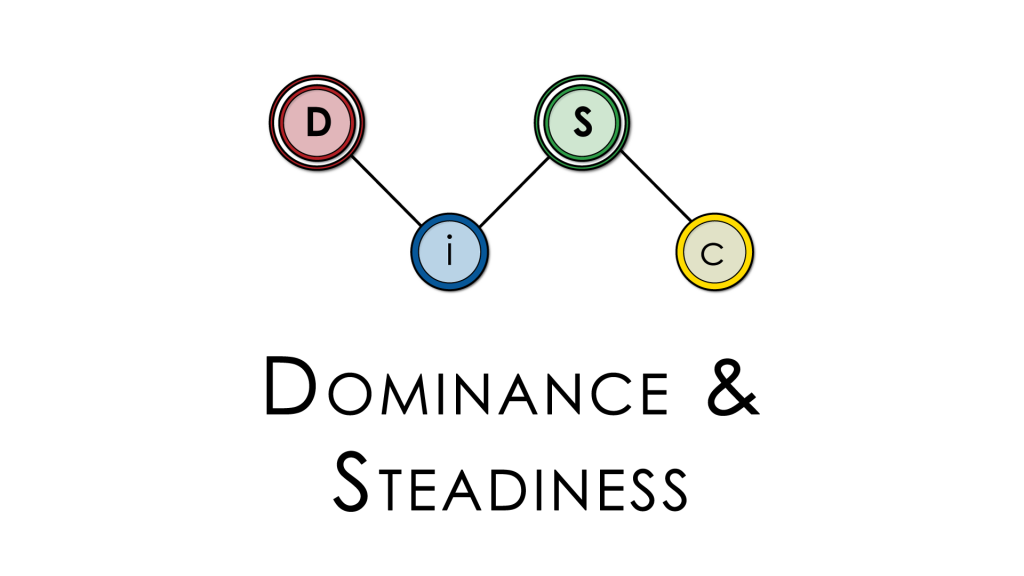 Individuals who have Elevated Dominance and Steadiness factors (and comparatively lower I and C) generally exhibit these tendencies:

Anyone well versed in DISC methodologies – especially DISC practitioners – will find that the elevated dominance and steadiness pattern is fairly uncommon in the general population. When it does occur, it is important to understand that the competing factors of Dominance and Steadiness are behavioral opposites. Additionally, dominance and steadiness imply fundamentally dissimilar values and behavioral tendencies that in most individuals are the polar opposite. These strong characteristics involving trust are in direct competition and this will undoubtedly cause conflict. This is because an elevated steadiness factor is an extremely open characteristic. Elevated steadiness levels indicate someone who likes to have rapport and trust when dealing with others and they tend to work openly.

On the other end of the spectrum, individuals with the elevated dominance characteristics most often represent people who are controlling in nature – because they like to control the situation. Elevated D tendencies will temper how much information this type of individual will willingly share with others. To compound this, they like things done their way and therefore can be cynical or suspicious of others ability to get the job done.

Additionally, because of these two competing factors, it is often extremely difficult for elevated dominance and elevated steadiness factors to coexist without causing an inordinate amount of stress in an individual. As such, people are less likely to trust Elevated D Elevated S types because others sense the internal battle – this often comes across as a sensed cognitive dissonance – of something not quite right. This doesn’t mean that people can’t have these two elevated factors and be stress-free. It is simply a low probability of occurrence in human personalities.

George Washington is an example of an Elevated DS Pattern.

Although it is rare to see, Washington displayed his two factors – dominance and steadiness – equally and used them to his advantage when being the dominant military and political leader of the United States of America. He led the Americans to victory over Britain in the American Revolutionary War as Commander in Chief of the Continental Army.

Elevated DS Patterns are Motivated by:

Washington was a quiet man but was very strong in his beliefs. After presiding over the writing of the Constitution, he was voted in unanimously as the first President of the United States. He used his competing dominance and steadiness to temper each other to develop the forms and rituals of government to lay the foundation for the leadership of the new-found United States. As the first President, Washington was considerably thoughtful about the impact he would have on the new nation. He thought long and hard about how he wanted to lead and after deep thought, adhered strictly to the tenets he prescribed. This was because of his elevated steadiness factor. However, his elevated dominance also sought to govern his actions. And steadiness was in direct contrast to the elevated dominance factor competing for supremacy in his profile.

Washington lamented to friends that he was often frustrated at the pace that people took to make decisions and on more than one occasion left the city rather than participate in a prolonged debate. As President, he was a strong, determined leader and as such, he built a strong, well-financed, disciplined, and well-managed government. This was the direct result of his highly elevated dominance factor. Most important, Washington was mature in handling his competing dominance and steadiness factors. He successfully let each govern to bring about the best results for the situations and challenges he faced.

Successful coexistence of the paradoxical Elevated D, Elevated S, therefore, depends on the person’s ability to adapt to each situation.

For example, the Elevated DS individual might show a highly open and friendly side of their personality if a high level of trust occurs between them and the others with whom they are interacting. On the other hand, they might show a high degree of assertiveness, and provide a calming influence during chaotic times by insisting on a methodical approach. These actions may slow the team down when others want to charge ahead before adequate planning is accomplished.

When he was the Commander in Chief of the Continental Army, Washington had to use his Elevated D Factor to be a leader and to develop plans of action. Upon changing roles, and becoming President, he had to help design and lead the new nation and had to utilize his Elevated S Factor. He was exceedingly thoughtful, political, and diplomatic. He used his factors to his advantage for his own advancement and for the good of the nation.

The Elevated DS profile will exhibit a single-mindedness typically displayed by the person insisting on a particular plan being seen through until the end. Once they think about the best course of action, it is almost impossible to sway their thinking. Washington was very concentrated in his efforts to lead people forward. He exhibited a high energy level and high levels of determination in being the leader of the Continental Army. He was very results-oriented and persistent in his goals. In fact, sometimes these Elevated DS Pattern folks can become doggedly focused to the point of belligerent stubbornness. This is not always a bad thing when things just have to be done – especially tough things that no one else has the stomach for.

In leadership positions, this profile will employ concentrated effort and high levels of determination to achieve their objectives placing a high emphasis on the planning and deliberation processes.

With the practical nature of this profile, they will attempt to successfully complete their responsibilities within realistic constraints and timelines. One word of warning — because of the competing dominance and steadiness factors, when this individual is under very little stress, the more thoughtful or contemplative aspects of the behavior will tend to overshadow the more controlling or assertive aspects of their personality. If they start to feel pressure when timelines become tight, or when urgent or demanding forces appear, this person’s behavior will reveal a more dominant or overbearing personality. Their thoughtfulness might disappear, surprising some. When allowed to operate at a comfortable pace, these individuals are very results-oriented, persistent, efficient, independent and thoughtful in nature.

Duality is inherent in this pattern or behavior type, wherein dominance seeks power and control and steadiness seeks out a stable and unchanging environment with adequate time to make decisions and mull over options. Remember that the competing factors of Dominance and Remember the most important thing about this profile is that Steadiness and Dominance factors mean that fundamentally dissimilar values and behavioral tendencies are competing with each other; these in most individuals are the polar opposite. This may cause the individual to be perceived as stressed or duplicitous, treacherous, tricky, or untrustworthy to those who do not adequately understand the nature of their underlying paradoxical and seemingly contradictory value system.

Another person who exhibited Elevated D and Elevated S factors was Carl Jung. He was a Swiss psychiatrist and the father of Transpersonal Psychology. He also founded Analytical Psychology and was one of the most well-known pioneers in the field of dream analysis. Jung had to be very thoughtful in his works, displaying his Elevated Steadiness tendencies. He also used his Elevated Dominance to further the advancement of his theories, debate with his detractors and spread his ideas. Jung often described himself as â€œdignified, authoritative, and influential.