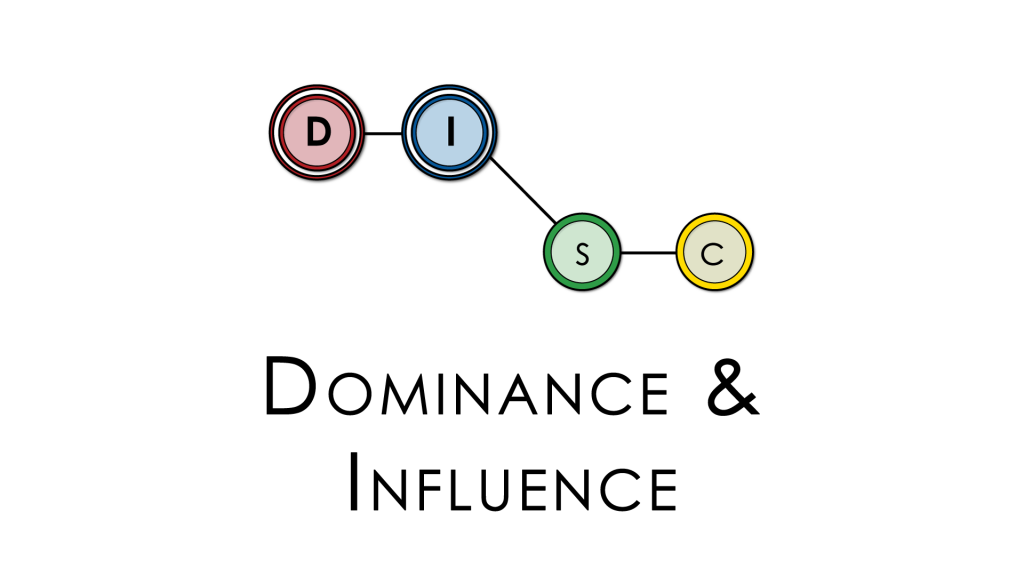 Elevated Dominance and Influence Pattern individuals generally exhibit a blend of assertiveness, political astuteness, independence, and sociability. These individuals have a tendency to be direct and dynamic, tempered with an enthusiastic and self-confident manner. They can be charming, while at the same time being extremely action oriented and self-motivated. Most often, individuals with this type of personality will attempt to work toward decisive goals that often involve teamwork or those that are dependent on the work of others to get them accomplished.

Fortunately, the Elevated D and I individual will most often try to achieve their goals by working closely with those around them, creating a highly motivated team. A word of caution, however, that if their team members do not have a high energy level or the ability to move at a fast pace, they might be quickly burnt out working for this type of person or they may be frustrated at the pace of change that is likely to occur in a team led by an Elevated D, Elevated I type.

Rush Limbaugh is a person who uses his DI to his advantage.

Limbaugh is an American Talk Show Host, a conservative political commentator, and an opinion leader in conservative politics in the United States. Using his on-air popularity and domineering personality, he criticizes liberal policies and accuses the American mainstream media of being too strongly liberal. Limbaugh is very enthusiastic and, as such, attracts attention from across the United States. It also causes him to be polarizing, often pitting the rest of the media against him.

The Elevated D and I individual will be more than willing to sacrifice their assertiveness and tendency to be domineering because they often have a burning desire to be respected, while at the same time having people like and approve of them. DISC instructors typically point out this type of pattern shape as the classic profile for a salesperson, who is required to work independently, to think and react quickly, and to adapt to changing situations that require them to use a subtle combination of persuasion and influence as well as driving to get others to accept their points of view or proposals.

They look for continuous improvement so that the situation does not repeat itself, and they are capable of propelling people toward decisions, but they will seek adequate time to either work behind the scenes or build buy-in and consensus with other team members.

Another example of an Elevated DI person was John F. Kennedy.

JFK is still one of America’s most revered public figures. He consistently knew how to leverage the media to drive his agenda. His famous Nixon debate will go down in the history books as an excellent example of influence tactics (using the Law of Image and the Law of Status) winning out over a far more prepared elder statesman. JFK knew how to use his good looks and a subtle combination of persuasion and influence to drive his points home to win the highest office in the land. JFK also used his dominance and influence to accomplish many things during his short presidency by sending out clear messages about his vision of America’s future. He was the youngest president ever elected and he and his family were regarded more like movie stars than politicians.

Theodore White’s December 1963 essay, based on an interview with Jacqueline Kennedy, established the analogy of King Arthur and Camelot with John F. Kennedy’s presidency. It was this essay that created the association of Camelot with JFK’s 1000-day presidency. White wrote these words describing what JFK’s Camelot represented, a magic moment in American history when gallant men danced with beautiful women when great deeds were done when artists, writers, and poets met at the White House, and the barbarians beyond the walls held back. But it wasn’t just music and laughter at the White House.

This was a time when an Elevated Dominance and Influence personality was essential for the country.

Events during his short two-year presidency included the Bay of Pigs Invasion, the Cuban Missile Crisis, the building of the Berlin Wall, the Space Race, the African-American Civil Rights Movement, and the early stages of the Vietnam War. During his Presidency and even today, JFK ranks highly in public opinion ratings. JFK came in third, after Martin Luther King and Mother Theresa, in Gallup’s List of Widely Admired People.

Elevated DI Patterns are Motivated by:

The Elevated DI individual is motivated by an emphasis on results through working with teams and through others, challenging and innovative team environments. They seek out new challenges and often do extremely well in highly stressful situations and professions that many others would find much too harrowing or difficult to deal with. They love overcoming obstacles in a collaborative atmosphere, and they also love putting out fires in team situations! Their need for achievement and success will insist that they find the root cause and influence of situations.

They are often fully capable of a high level of authority because their influencing skills are matched by their drive to complete goals, and although competitive. Will not stomp on others to achieve goals at times, achieve success or recognition. They tend to be good motivators who will “egg the team on” to better the last best. They are highly motivated by friendly competition.

Rush Limbaugh uses his authority and influencing skills to drive his goals and compete with other radio stations and opinions. In his line of work, you have to be the best. If ratings drop and not as many people are listening, the radio station will find someone else whose opinions will generate audience support. Competition is key in the radio world and Limbaugh uses his dominance and influence to his advantage when presenting on air.

The necessity for successful achievement means that they are predisposed to undertake almost any challenge as long as the challenge has associated rewards and recognition tagged to it.

The Elevated Dominance individual is usually willing to take calculated risks, but the Elevated Influence factor associated with this type of individual will temper that same risk-taking. It is important to grant the appropriate level of authority to these individuals for them to make decisions, however, this authority may be swayed by personal relationships or other subjective persuasion factors. This type of individual has their batteries renewed by other people and therefore they exhibit a high energy level that is rarely seen in other types of profiles. But be warned: Unfortunately, this energy level can burn out those around them!

When Limbaugh presents on air, he must have high energy. A boring radio presentation would turn away listeners and they would choose another station. High energy entices people and makes them sit up and pay attention. When you have high energy and confidence when you speak, people automatically regard you as informative and knowledgeable.

They are motivated by professional and personal growth for themselves as well as other team members on a consistent basis. These individuals will do extremely well with more authority and less supervision in a collaborative team environment, where they can be free to express themselves and have significant freedom from rules, strict processes, and set methodologies. Elevated Dominance and Influence individuals often see the big picture or overall vision of what should occur in order to achieve success. However, it is important for other team members around them to make sure that someone else fills in the details and maps out the steps necessary to implement plans and ideas.

A possible weakness of the Elevated DI individual is that their desire for freedom from the routine and outside influence of others can make them seem mercurial in nature to other team members. Although they are focused on bottom-line results, their judgment can be swayed depending on what interests or intrigues them at the moment.

Their desire for recognition, rewards, prestige, or status is often seen as a weakness as they climb the leadership ladder. In addition, these individuals can be highly adaptive, and if they don’t see the team moving along in the direction they deem appropriate, they can revert to an overbearing or aggressive behavior style, especially when under pressure.

This type of personality does not fear confrontation and confronts their superiors and upper-level management without trepidation.

In extreme cases, the Elevated D Elevated I individual can be difficult to work with because of their refusal to step away from conflict. When they are dealing with less assertive or less confrontational team members, they may steamroll over others to drive home their points or get their way. Because of this, others may find it difficult to work with them for extended periods of time.