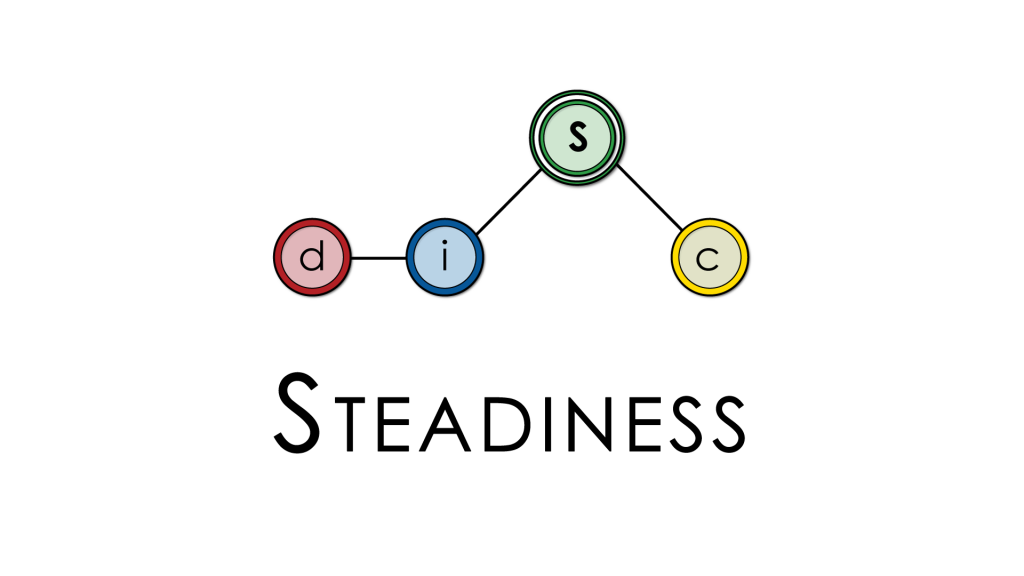 Individuals who have an Elevated score in Steadiness generally exhibit these types of tendencies:

Elevated S Pattern individuals are thoughtful, attentive, and considerate. They are instinctively good at relating to others. They accomplish goals through personal relationships with other team member and employees but are also able to complete tasks reliably. Elevated S individuals make others in the organization feel like they belong because they are able to listen attentively and think deeply about other people’s concerns. Generally, they show sincerity and are trustworthy individuals. This is truly the personality type that has a high degree of common sense, and they are often pragmatic and see simpler or easier ways of doing things. Elevated S individuals identify strongly with working together in harmony with others in the team. They are good listeners, team players, and they strive to build relationships. Often, the Elevated S person will be the most diplomatic in the organization and is often counted on to reconcile conflicts between disparate parties.

One person who used their Elevated S factor to their advantage is Rosa Parks.

Her thoughtful qualities led her to make a stand and refuse to give up her seat to a white man on a segregated bus. Although others had some this before her, her actions sparked the Montgomery Bus Boycott. Her act of civil disobedience became an important symbol of the modern Civil Rights Movement.

Elevated S individuals are usually truthful, authentic, honorable, loyal, and dedicated. They are usually predictable in their behavior. Therefore they are more stable individuals. They are likely to be more even-tempered than most, as they are typically more calm, relaxed, and patient. They tend to be good facilitators, even though they are not necessarily good at influencing. Elevated S individuals can be understanding, empathetic, and supportive of others. They are easily assimilated into team goals and are usually compliant with authority standards.

Parks was predictable and consistent in her values. At the time of her actions, she was the secretary of the Montgomery Chapter of the NAACP, the National Association for the Advancement of Color People.

She had also recently attended the Highlander Folk School, a center for workersâ€™ rights and racial equality. She was very loyal and dedicated to the cause but when she took action, she did so as a private citizen. When she acted, she was calm and patient, very typical of an S personality.

Elevated S Patterns are Motivated By:

Elevated S individuals are motivated by a clear definition of responsibilities, accountabilities, and authority parameters. They like to work at a steady pace with no sudden changes to their duties. They want to be in an environment that allows them to work behind the scenes, but still get rewarded for their efforts. People with an Elevated S want safety and security in their workplace. They are very motivated by any recognition given for their loyalty and dependability.

When working on a task or activity, the Elevated S individual likes to be lead logically from start to finish. They want to work in a team atmosphere that is fair and balanced with regard to rewards and recognition for all team players. They prefer the cooperative environment without conflict or unnecessary arguments but will stick to their principles or responsibilities if they find themselves to be in conflict with other team members. All in all, the Elevated S individual likes to have a respectful debate rather than an environment where unstructured brainstorming, boisterous debate, and conflict are the norm.

Rosa Parks, a peaceful woman, stuck to her principles and responsibilities to herself and other African-Americans. Working with other activists, she was in a cooperative environment and being the secretary of the NAACP, she had her own responsibilities and accountabilities for that as well.

Possible weaknesses of the Elevated S individual are that they can be resistant to change and if they do deal with the change, it can typically take a long time for them to adjust to it. Because they are so thoughtful, their introspective can turn to the dark side and become brooding and self-absorbed. In professional relationships, Elevated S’s dislike receiving or giving harsh feedback, even when it is necessary. Sometimes, they can exhibit difficulty in establishing priorities.

This is particularly true when dealing with paradoxical, competing imperatives. Another possible weakness is that the Elevated S individual may exhibit passive-aggressive behavior. When they don’t agree with something, such as being openly agreeable, but inwardly unyielding. They want to get along with the other person or people in the conflict, but they don’t want to change their approach, principles, or values. Being thoughtful, they might have a tendency to slow down the implementation part of a project.

Rosa Parks participated in Civil Disobedience, which could be seen as passive-aggressive behavior. She did not act in anger or in huge forms but did so subtly and her actions sparked the Bus Boycott in Montgomery. Although she did not like conflict, she did not change her principles or values about desegregation.

Another person who used his Elevated S factor to his advantage was Jimmy Carter.

His values shaped his Presidency and caused the development of new departments, specifically the Department of Education. He also established a national energy policy that included conservation. Jimmy also strongly emphasized human rights and after leaving office, he founded the Carter Center, a nongovernmental not-for-profit organization that works to advance human rights. He is also a key figure in the Habitat for Humanity project. He uses his thoughtfulness and dedicated to change the lives of others, especially those in Third World countries. On the flip side, President Carter exhibited some of the weaknesses of the Elevated S personality. He was sometimes viewed as ineffective because his detractors deemed that he did not take charge of the American international policy appropriately.

Many thought that he took far too long to make decisions and they he looked indecisive. One reason why was because he asked too many people their opinions. Thoughtful people are often agreeable peacemakers, but when you are attempting to make peace with those who do not want to participate in the peace process, a leader can be seen as unsuccessful and ineffective. This is especially true when many believe that they are too persistent in pursuing futile paths of action as happened with Carter’s position in the Middle East in the early 1980s.