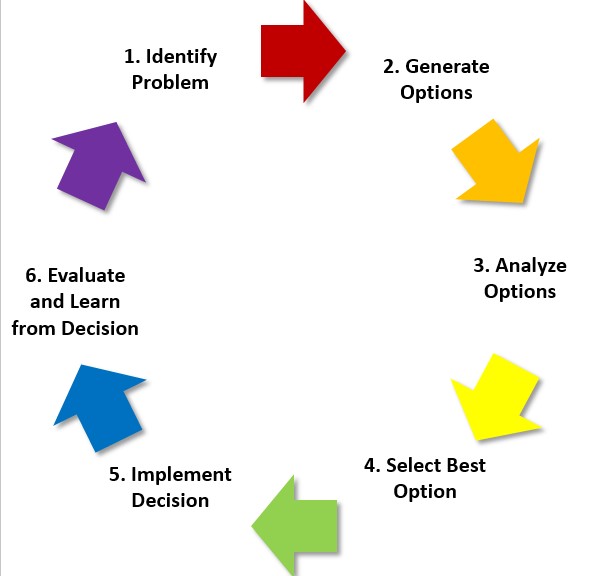 Did you know that the average person makes a minimum of five decisions per minute when engaged in thought?

Add up the number of minutes in the typical eight hour work day, and you are at 480 minutes. This potentially could translate into 2,400 decisions we make each day at work!

The ultimate goal: Make the best possible decisions we can with the knowledge and experience we have available to us. After all, once you make an important decision, you want to look back and know that you made the right decision, correct? Ineffective or poor decision-making skills can result in disastrous consequences that can cost your organization time, money, and resources, and may even ruin a company’s reputation.

Let’s talk about an example of good versus bad decision making.

What momentum would they have?

At what point would they decide to start a recovery plan or change course?

How would they make sure that the same problem didn’t happen next quarter?

In order to make good decisions, we need to understand the steps involved in the decision-making process, ones that happen consciously or unconsciously. We also should have a base of knowledge concerning the processes and biases that come into play that could set bad decision making in motion. We should be able to reflect each time we come to a final decision so that we learn from our successful decisions as well as our failed decisions.

If you look at the initial decision the manager made in determining what to measure, wouldn’t it have made more sense to also measure the number of prospects the sales team puts in the pipeline? As we learned in Performance Management, “That which you measure, people focus on.”

Remember, metrics in decision making are important because “What gets measured, get done!” Great sales managers know that all sales staff should have an active prospect list, a list that is constantly updated. An active prospecting list is a basis for sales activity. It is the leading indicator of sales results. If the sales team focused on both sales numbers AND on prospects, their success would be better, guaranteed.

Good decisions are based on facts and research and are of tremendous value to any organization.

Using an effective decision-making process based on facts and research will teach you and your team to put aside hunches and personal feelings until you can validate them. You can make decisions after a full analysis of the problem, and by using all the data available. Then, you can determine if your first impressions were valid. Plus, it will bring about a climate of accountability and shows a clear rationale for arriving at decisions using a combination of logic and gut feel. The manager and team in the example obviously didn’t use an effective decision-making process to come up with the best plan to benefit the team or the company.

When used correctly and if all individuals and teams use the same decision-making process to make the best decisions possible, everyone will be on the same page with regard to how decisions should be best made. This can be extremely beneficial. When your team gets to the point where they have to make a final decision, you want the team to make the decision based on logic and not be anchored solely on their instincts. Doing so leaves the decision-making process open to error since the process may be infused with ingrained prejudice or bias.

In the Enterprise Development Suite course, we are going to examine decision making in depth. The Rational Decision-Making process. How is Intuitive Decision Making formed? Do common biases affect our decisions?

The Rational Decision-Making Process is a 6-step process.

It requires you to identify your problem, develop options, and analyze them from a cost/benefit perspective. After you have selected and implemented the decision, you circle back to the original decision and evaluate it. During this phase, you should also revisit your initial gut reaction – the first intuitive thought of what decision you would have made prior to gathering your decision making information.

This final step of evaluating is often overlooked, but it is an important step. By using an evaluation process, you will be able to learn from your mistakes and avoid making the same mistakes in the future. You will also see how adept you are at making intuitive decisions in the similar situations. In this way, you are flexing and stretching your overall decision-making muscles, ultimately making them more resilient and stronger.

After you learn about Rational Decision Making, you are going to learn how to get to the point of making good decisions intuitively.

Using the Rational Decision-Making process on a consistent basis, you might get to the level where your intuition has been superbly groomed. By using this course information, you and the people in your organization can adopt a standardized way of coming to conclusions and evaluating decisions based on their value to the organization. In addition, a Rational Decision-Making Process ensures that strategic decisions are made by the appropriate level.

The six steps in our Rational Decision-Making Process are:

Rational Decision Making: Based on facts and research.

Rarely are these two different ways of making decisions completely autonomous. However, for the purpose of teaching you the fundamental differences between the two, in this coursework, we are going to separate them. Then, after you understand the strengths and weaknesses of both, we will show you how to best use them in tandem.

Before we do this, let’s talk about how our mind reacts when initially faced with a decision. The Model for Actions and Behaviors shows that decision making is the step just prior to the culmination of how actions and behaviors are formed: 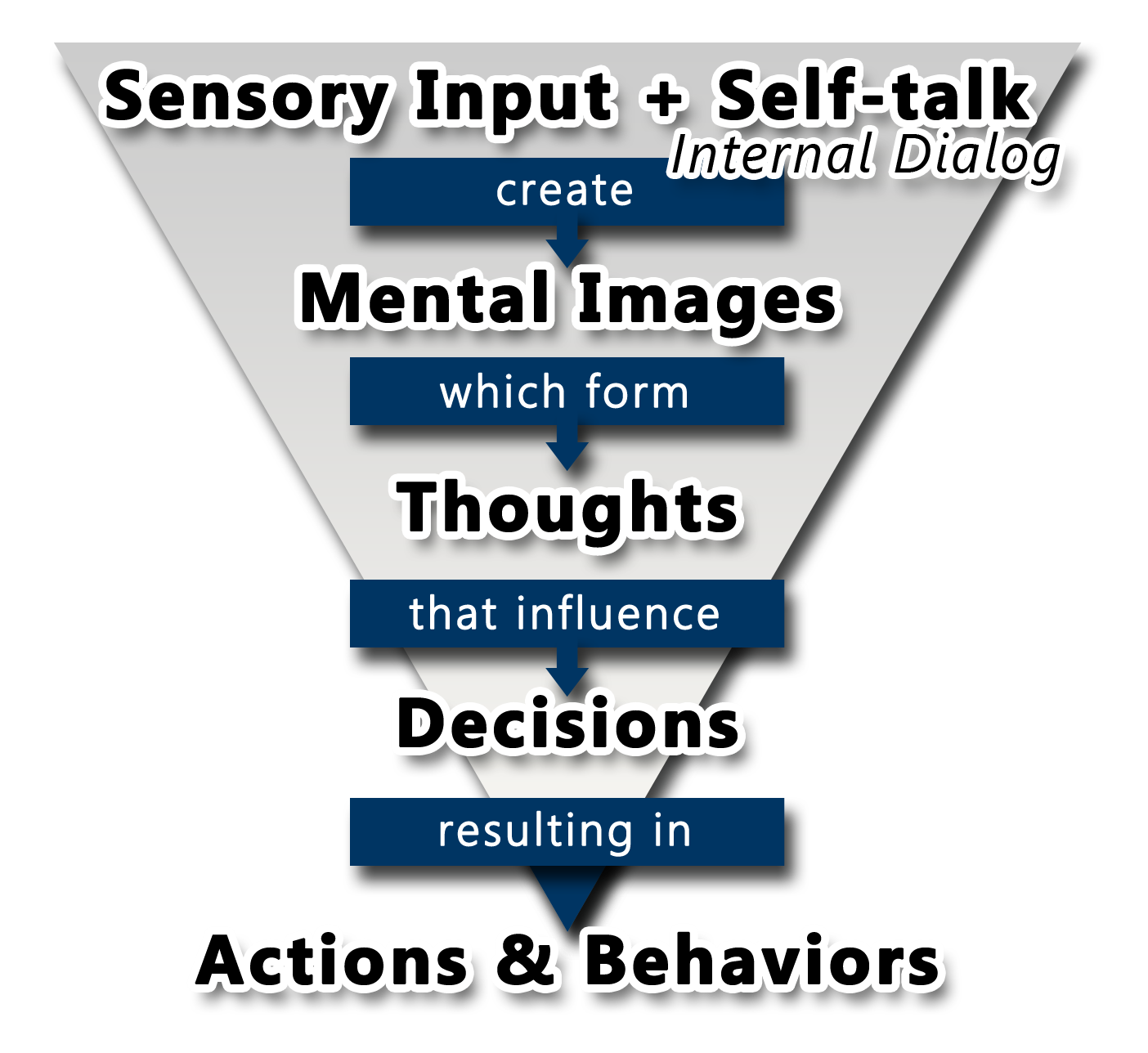 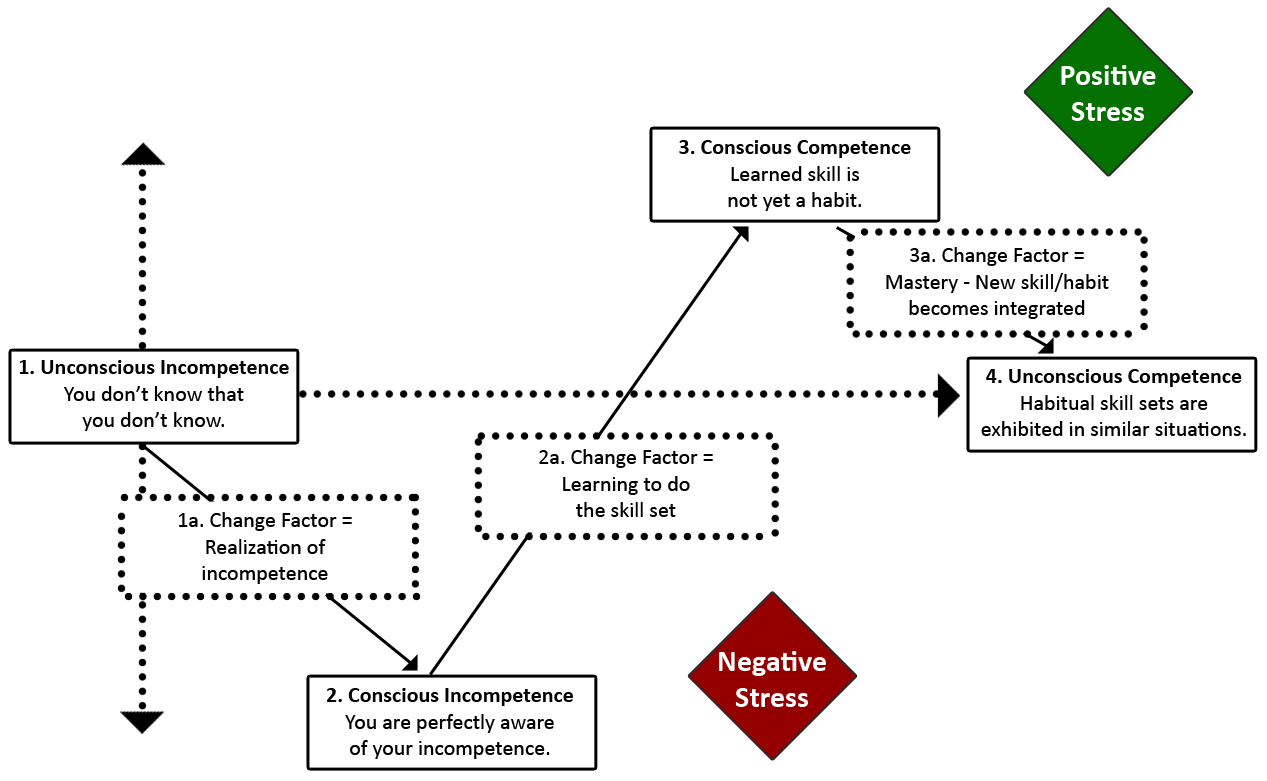 For example, People with an annoying habit of saying Umm when speaking often don’t realize what they are doing.

Here is the rub: Much of what we do unconsciously, we have not planned.

We haven’t really thought enough about how we have formed our habit patterns. If we are lucky, our unconscious habits are good habits, but what if they aren’t? What if all the decisions that underpin our habits hurt us? Wouldn’t it make sense to examine our habits and unwind those that we don’t like? Shouldn’t we make the decision to systematically go through the Unconscious Competence Model for the habits that are important to our success?

These four steps in the Unconscious Competence Model can occur any time we do something over and over again. Until we become aware, it will be difficult to make good decisions – or form great habits – and have this become a natural part of our psyche.

Circling back to the Rational and Intuitive Decision Making Processes:

Of these two processes, the most important one to actively use and become proficient at using is the Rational Decision Making Process. This process is when you:

If we examine Rational Decision Making, it requires that you use a cognitive or rigorous thought process where each step follows in a logical order from the one before. Through our cognition, we acquire knowledge, based on thinking through and weighing all of the alternatives to come up with the best potential result. In other words, you follow an orderly process. By using judicious or logical steps. The Rational Decision-Making Process ensures that your decisions come from organized facts.

As we said, once you become proficient in using the Rational Decision Making Process, many of your decisions will eventually become instinctual, or second nature. You will be able to make good decisions that won’t require deep thought; they will just become natural, and your decisions will be quick and easy, and stress free.

That is the goal of the Enterprise Development Suite course: Become intuitive in wise decision making.

You will feel confident in your abilities to make decisions based on natural or learned instincts that are well grounded in logic.

A good example of an Intuitive Decision is a firefighter’s quick reactions: When arriving at a fire, they are able to save lives because they make decisions based on intuition. How are heroic firefighters able to make those quick, split-second decisions that mean the difference between life and death? They act instinctively, and because of their quick automatic responses, lives are saved.

Firefighters weren’t born like this – knowing how to fight fires. They spend a lot of time building their instincts with things like:

Ideally, people spend time in all of these methods to hone their decision making processes, no matter what their job responsibilities are. Training, simulations, experience, and pre-programming and mental rehearsal are all important competencies. We touch on many of these in decision making and in other courses of the Enterprise Development Suite eLearning.

Would you prefer live training instead of an elearning course? Contact us about Booking Hellen Davis as a coach or motivational speaker for your team or organization.